I managed to get out with an old friend on Friday, the 22nd. We had no problem locating stripers and we were rigged up with trout and bluebacks on an assortment of downlines, planer boards and a free line. We pulled baits through striper schools all day and had a couple stripers and 3-4 big spotted bass to show for the day. It was that way a week earlier when I had found plenty of fish but getting takers was tough. I had been using some Sunline fluorocarbon for leader material and finally made a trip to Bass Pro for some decent fluorocarbon. I picked up my favorite, Bass Pro XPS in 17lb test. That’s what I’ve used for a few years now and I really trust it for all of my fishing. Once I made the switch, fishing got a lot better. We had margarita’s on Friday night with some old friends and Saturday morning I was feeling rough. I could see that the lake was windy, looking out the living room window at our bay. I still had a dozen trout in the tank and I also had about a dozen blueback I netted off the dock after we got back from dinner. The blueback were only about 2 inches long but I figured they would make a good small bait offering on downlines. Much to my surprise, when I checked the tank right before going out, all the bluebacks had been eaten by a dozen fat trout. I jumped in the boat and told Lisa I was going to the marina to get gas. After I got gas I cruised over to an area that we saw stripers the day before but it was very windy and no stripers were in the area. I drove the boat back to a little cove that was out of the howling NW wind and started marking fish. I saw a few nice fish come to the surface and I thought it might be a good place to fish out of the wind for a couple hours. I went back to the house and convinced Lisa that there was a good chance of getting a couple stripers if she wanted to get out. She agreed and we were off with the dog on an afternoon run with our 12 big fat trout. We ran 2 planer boards and a freeline trout straight out the back 100 feet. We spent the next 2 hours catching fish before we left them biting because we ran out of bait. Out of 12 trout we had landed 8 stripers and 2 catfish. It was a lot of fun on a Saturday afternoon. Here’s a few pictures and a video of our short trip. 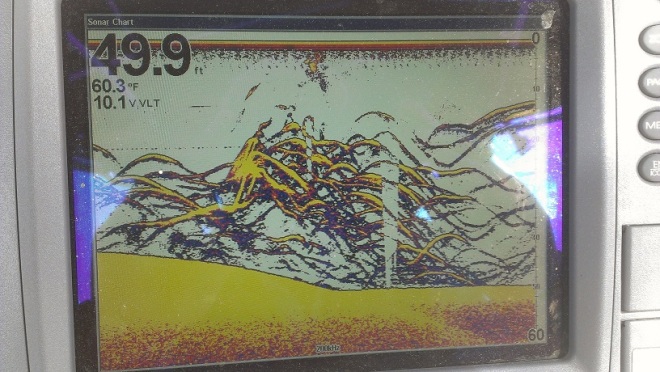 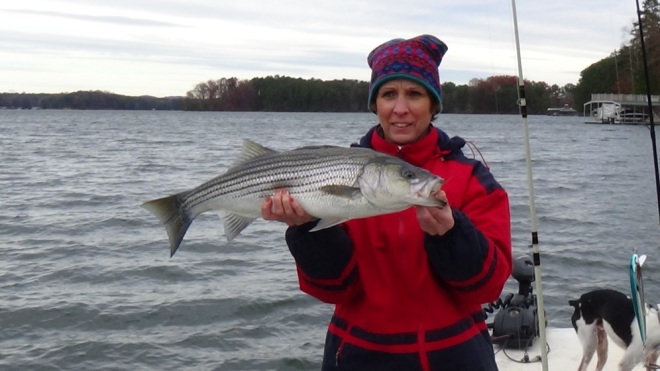