Today we decided to troll some deep diving crank baits on some heavier gear (6lb test) and targeted depths of 20-30 feet clipping points. We wound up with 6 bass and 1 striper today. We didn’t take any pictures yesterday but we took a few pictures today. Great day to be on the lake. Here’s a couple pics from today. 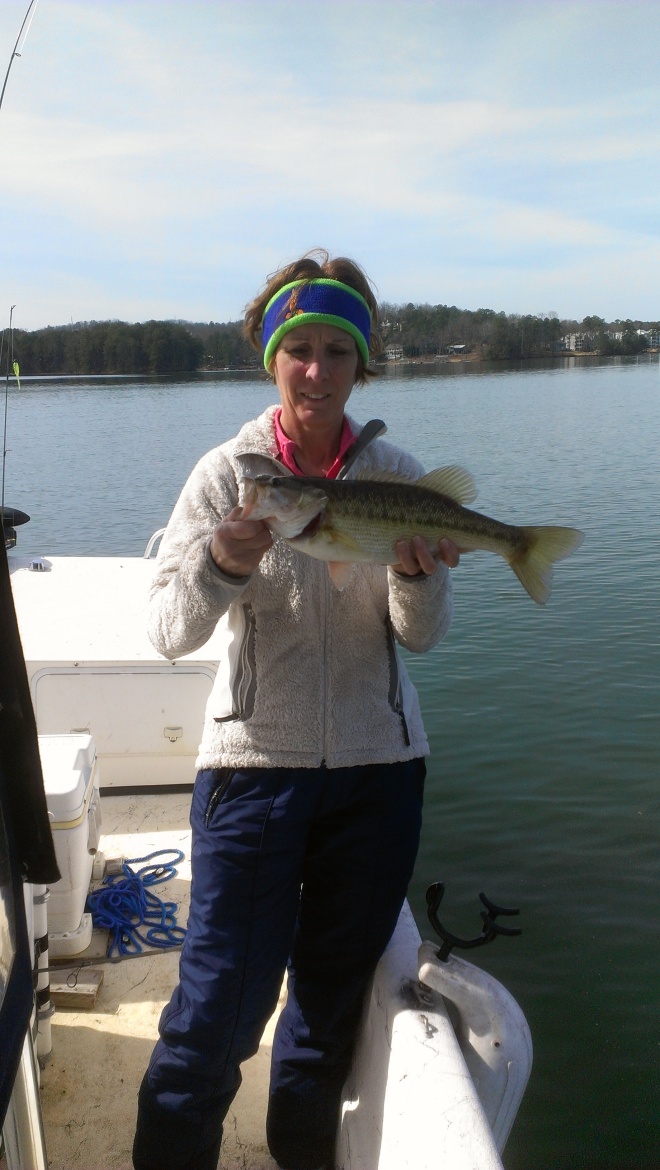 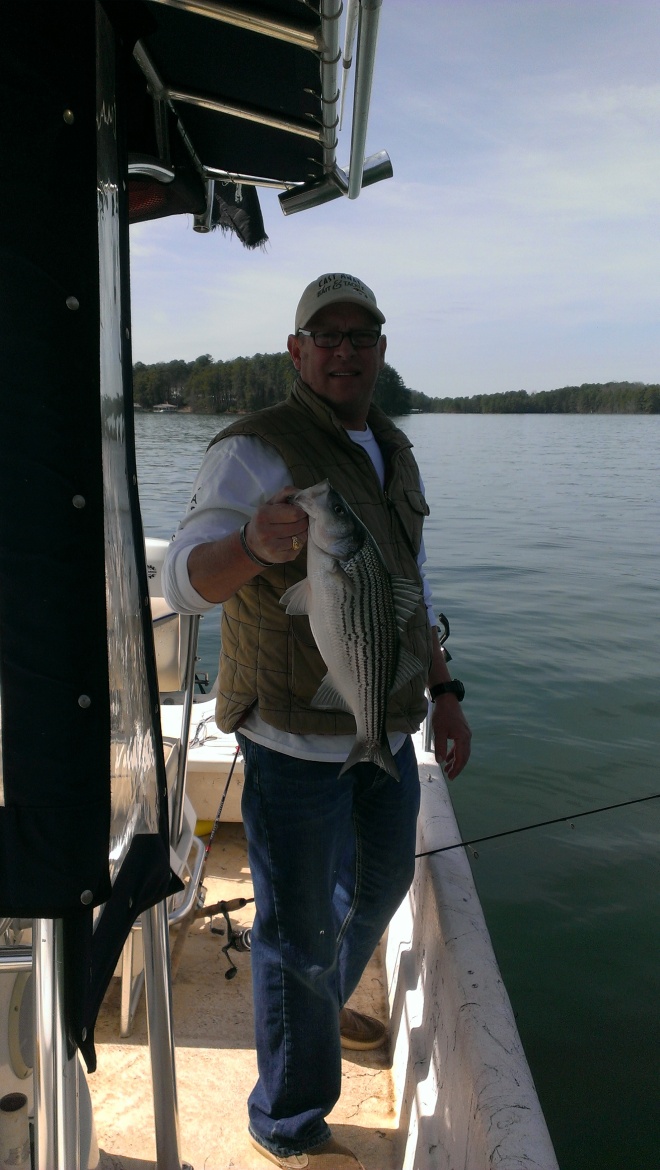 Well, my plan was to get some good looking crappie jigs and a few minnows and search the creek for crappie. Lisa and I had bought each other crappie rods for Valentines day and we are determined to catch crappie with our tiny new rods. Lisa and I went from stalking big striped bass on heavy tackle to sizing down to crappie and finesse fishing around docks and structure in a matter of a few weeks. This took some getting use to. I practiced shooting docks with my little rod and I must say that I’ve gotten pretty good at it. It’s kinda like fishing with a slingshot. Our plan was to throw around docks and structure to see if we could locate any schools of crappie and concentrate on those areas while loading the cooler with a bounty of the little speckled beauties.

Off we went at lunchtime for an afternoon of fishing. The back of the creek was completely blown out from recent rains so we decided to fish outside the mud line in the clearer waters. I think we chunked and jigged around docks for an hour or so then I decided to hit some blow downs along the shore. We were using a variety of colored jigs in 2 sizes, 1/6 ounce and a 1/32 ounce with some little Bobby Garland bug looking plastics. I liked the little Key Lime Pie color because Key Lime reminds me of Key West and some of the many memories I made on that little island paradise. I put that little plastic on a 1/16 ounce green colored jig head and started throwing around shoreline and blow down structure. It didn’t take long and I had my first fish on the little crappie rod and the fight was on. I realized very quickly that this was probably not a crappie as the fish stripped drag on the little rod. I played the fish on the 4lb test fluorocarbon line. When the fish finally came to the surface it was a nice respectable spotted bass. He was very lively and I thought maybe he had been hanging out in the warmer water of the shoreline. I returned the fish to the lake and off we went again in search of crappie. Lisa was in the front of the boat trying different colors and was just as determined as I was to catch a fish. I threw my little jig just beyond the end of a pretty big blown down and let the jig drop till the line went slack. As I put pressure on the jig I felt a little tap tap and set the hook on another fish. Just like the first, the fish stripped drag at will and when the little fella surfaced it turned out to be another respectable spotted bass.

At the point of catching the second bass within a few minutes of the first, to me that constitutes a pattern and should be addressed as such. I put the same jig pattern on Lisa’s little crappie rod and we went to fishing shoreline for bass with our tiny crappie rods and Key Lime bass jigs. It didn’t take long till Lisa got in the act with her first bass, a nice little buck bass in less than 10 feet of water. I believe the drag screaming on the little crappie reels is just about as exciting as the drag screaming on our big gear with a big striper doing the pulling. After the third and fourth bass we decided that the fish were hanging in 5-10 feet of water so we concentrated our efforts to that depth. We had a blast catching bass along the sun drenched shoreline of the creek and at last count we had a total of 9 nice spotted bass boated and a few that pulled off. We never caught crappie one during the whole afternoon but it sure was a lot of fun to catch bass on ultra light tackle. To cap off the evening I turned on the dock lights and did a little crappie fishing with crappie minnows under the dock lights. I didn’t expect much because the water was stained to the color of my morning coffee with heavy cream. Not long after putting out 2 lines complete with spanking new bobbers, one of the bobbers submerged and I knew I had my first crappie of 2014. I grabbed the rod and the fish was off to the races as he went under the dock and then under my boat that was inside the slip. I kept pressure on the fish and finally he came to the surface. I got a quick glimpse of what looked to be a 2-3lb crappie from the lighter color of the fish but on second inspection I realized that it was a nice respectable 2-3lb Largemouth bass. I fished for a while longer and didn’t get another bite so I called it a day. Surface temps in the creek varied from 50-53 degrees so there is a definite warm up in water temps. Looks like it’s shaping up to be a great spring.