I got out on the lake a few times this week and it’s been great. I don’t do weekends this time of year but I do like to throw out a report for the folks that can’t make it out during the week and are the true weekend warriors this time of year. I was told years ago by a very wise fisherman that when the moon and the sun are in the sky at the same time the fish bite the best. I’m convinced that that is just about always the case judging from my experiences over the years and it held true this week. The lake has set up for a 3 pattern bite right now and when you can catch them on 3 different patterns it really really makes summer fishing fun.

Here’s the scenario: You find humps or points in the creek or out on the main lake that have brush in 20-30 feet of water. The reason for those depths is that the thermocline is setting up and it tops out at about 20 feet and runs down a good 30 feet this time of year. The bass will find brush and structure at that depth and make it their summer home. On some days the bass will range out in search of schools of blueback herring that drift into their area and some days they will stay tight to the structure. If you have them marked on your gps you stay off of the brushpile by about a casting distance length away and make a few casts with a topwater bait. Sometimes there is what I like to call a “Bull Bass” cruising above the brush and he’s guarding the area and looking for something to eat. The big bull usually eats first and then the rest will follow. Generally he will strike out at any bait on the first cast. My favorite summer topwater baits are the Emerald Popper or a walking bait like a translucent KVD Sexy Dawg walking bait. That’s what I used to get the bull. I’ll make 5-10 cast with that while circling the structure and making casts from different angles. One thing that is very important this time of year is putting your catch in the live well to extend the bite. Make sure your livewell has nice cool water and some kind of O2 system. You’re only going to keep them there for a short period of time to extend the bite but you release them right before leaving the area. The reason for this is that sometimes a released fish will kill the bite. It’s like these bass have pheromones’ that alarm the other fish much like a bee that stings you, releasing a pheromone that alerts the other bees to sting you. After I make my topwater cast I keep my topwater bait handy in case the fish start coming to the surface to feed. You’ll want that topwater handy to make a quick cast at the surfacing fish. Next is the spybait. I’ll generally move in just a bite closer to the brush and start making casts with my spybait. On the spybait option, pick your favorite color and size or cycle through colors and sizes until you find one that works. There are many color patterns and a few sizes to choose from. I use a 5-10 second count down on my spybait and start a slow steady retrieve. Try different speeds until you hit the sweet spot with the spybait speed. If you catch a fish at a certain speed try and mimic that speed again. Once you find the right speed and start catching fish after a while that speed will become natural for you. I do the same thing as I did the topwater, I’ll circle the area making casts around and across the brush. The spybait is small and the ideal gear for this pattern is 6lb fluorocarbon ties on a good reel with the drag set properly for 6lb test and a Medium fast action rod about 7′ in length. If the spybait is working I’ll keep making cast until I feel like that pattern is slowing down. This is when I ease up on the brush and start the drop shot pattern. If you’ve never used the drop shot you are really missing out this time of year. My suggestion is that you do some research on the drop shot pattern and start practicing or book a trip with LJ Harmon from Lanier Baits. I hoover over my front graph waiting for fish to show up on the graph. When they do I’ll drop my bait down and watch it on the graph. If your electronics are tuned correctly and you drop around your transducer you can watch your bait go down in real time and you can watch the fish react to your bait. This is sometimes called video fishing and it is a blast.

I strongly suggest that you do research on these patterns and get out there putting them to use. It took me a while to learn these summer techniques but when you learn them you can go out on the lake during the summer and just about always catch fish on one or all of these patterns. Here’s a few pictures from the last few days on the lake and I also included a link to my latest video on spybait tactic and tips. https://www.youtube.com/watch?v=CcNSKTXVBVE 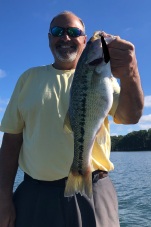 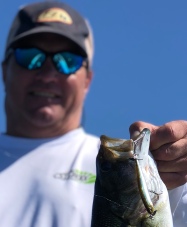 One thought on “The summer patterns are here! 6/13”