Not much has changed since my last report and fishing is pretty typical for this time of the year. I will say one thing that is a noticeable difference from past years and that’s the population increase of stripers. I’m sure we can attribute that to the Georgia DNR’s stocking program and the great numbers of fingerlings they have been putting in the lake for the past few years. I think there were a few stockings in upwards of 600k fingerlings over the past 10 years which is almost double from what the lake would generally get. The stripers from those stockings are starting to get bigger and showing up around the lake in good numbers. The water quality is good all around the lake including the far reaches of the creek arms which means the fish are scattered throughout the lake. Right now you have many options for catching fish. The biggest ticket item has been the early morning striper and bass topwater bite. It’s fun, fast and furious. A lot of the fish I’ve been catching on topwater have been relating to structure, particularly the bass but the stripers have been present in the same areas. Basically the fish are using the structure as home base while moving around the structure looking for a meal. My recommendation right now for targeting these fish is some kind of bone or light colored plug, whether it’s topwater or something running just below the surface. Here’s a short video to explain how I’ve been getting a few. The second striper in the video was taken with a Sebile Magic Swimmer. I was just moving around sight fishing.

I’m still getting a few fish on the Emerald Popper on cloudy days and low light conditions but the more aggressive fish have been hitting the solid bone or light colors right now. There are several different topwater baits that will work and several different manufacturers that make a bone colored topwater bait or sub-surface bait. Here’s a picture of one I make in the shop and the one I used in the video above.

Once the topwater bite dies off about 9-10am it’s time for the grind. I’ve been squeezing out a few more fish with a chrome Rattle Trap or a Sebile Magic Swimmer after the surface activity subsides in the same areas but once that’s over I’ve been hitting the docks and shoreline with the shaky head or a shallow diving crankbait in a shad pattern. The docks have been producing a lot of smaller fish lately but if you’re looking for numbers and not size, docks and the backs of pockets will provide a lot of smaller fish on a variety of baits. I’ve also been catching a few fish around blow-downs with a shad pattern jerkbait. Here’s a picture of the jerkbait pattern I’ve been using around blown-downs rocky points and shallow structure.

One other way I’ve been picking up fish recently after the topwater bite slows is to circle back around and keep fishing the same areas of early morning surfacing fish but casting a Blueback Herring pattern Shadow Rap. I’m just casting around the areas and particularly over areas of underwater structure from 20-30 feet in depth. It seems that some of the bigger fish are heading out to deeper water for the summer and spending their days looking for drifting bluebacks. Here’s a pic of a nice one caught in the early afternoon over deep water with the Shadow Rap. 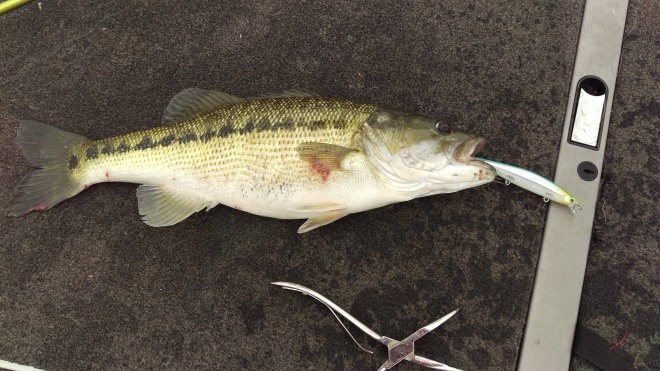 With the water temps fluctuating right now the topwater pattern is hit and miss so it’s good to have a few alternate methods because there are going to be days the topwater just doesn’t happen. Water temps as I write this are just above 70 degrees and the water visibility is getting clearer by the day. Over all the topwater bite should last another month or so before the fish hunker down in the depths for a hot summer.