We first starting using the Emerald Popper on Lanier way back in September of 2014. It was a bait I made for a trip to Lake Burton to use on some early fall topwater Largemouth. Burton is a very clear lake and I figured the translucent bait would work perfectly for the conditions up at Burton. As it turned out the bass liked a translucent Sammy style bait I had made and we never even put the Emerald Popper in the water. After we returned from Burton Lisa and I made a early morning trip to some of my favorite spots in the creek. It was early fall and there was some surface activity so I started working a Sammy knock off and Lisa decided to tie on the Emerald Popper because it was something different and it looked kinda cool. On the first cast she caught a nice bass and followed it up with another one within a few more casts. I was steady working the walking bait with a couple of swirls to show for it and Lisa starting mopping up on me with the popper. “When I make baits, I always make at least 2 just to be on the safe side. There have been times when I’ve only made one prototype bait, only to have a big fish break it off and I’m standing there wishing I had made another one or two. For that reason I had another Emerald Popper in my box and I tied it on”. That was the start of a very fun fall topwater season.

Lisa and I caught fish all through the fall with the popper but the stripers wouldn’t touch it. I just figured it was one of those baits that bass liked but it couldn’t interest the stripers. During the early spring of 2015 I started using the big bone Vixen so the topwater popper stayed in the box while we used the Vixen throughout the spring and early summer. When the fall of 2015 rolled around I broke out the popper again and to my surprise I started catching stripers with it while bass fishing. I also used it to target sight fishing topwater stripers that were coming to the surface. Lisa and I would take the boat out on nice fall evenings, watch for surfacing schools of stripers and run and gun using the popper. We were also catching some nice fish during the fall days with the bait. One of the reasons we have been having good success with the bait and the stripers is because I made a small change to the bait and replaced the KVD hooks with Eagle Claw nickel plated 375 trebles and added a holographic streamer dressed treble hook trailer. I added the dressed treble hook to help stabilize the bait and the holographic streamers added a little flash to the bait. We had a lot of fun with the bait and once again, this spring has produced some great bass and stripers on the bait.

If you watch the videos below you can see that it’s usually a combination of popping, splashing and waking the bait that makes it work. When I’m waking the bait it looks like it is swimming and the little dressed treble in the back is swaying back and forth as it swims. Between the color of the bait, the action as well as the ripple lines it creates when waking the bait, the fish can’t resist it. Most of the time if the fish misses on the first strike the fish won’t quit on the bait until he’s hooked. We’ve also caught fish 2 at a time on the bait which has been a nice surprise. Here’s some of my favorite videos and pictures of the popper in action. If you enlarge the first video you can see the big striper bird dogging the popper back to the boat before he blows up on it. Unfortunately my camera lens was fogged/iced over from the cold morning. 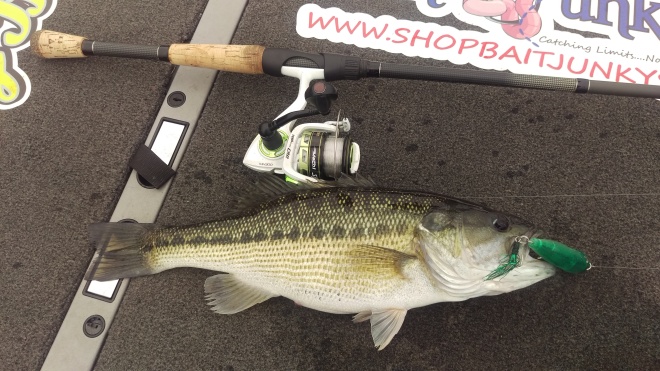 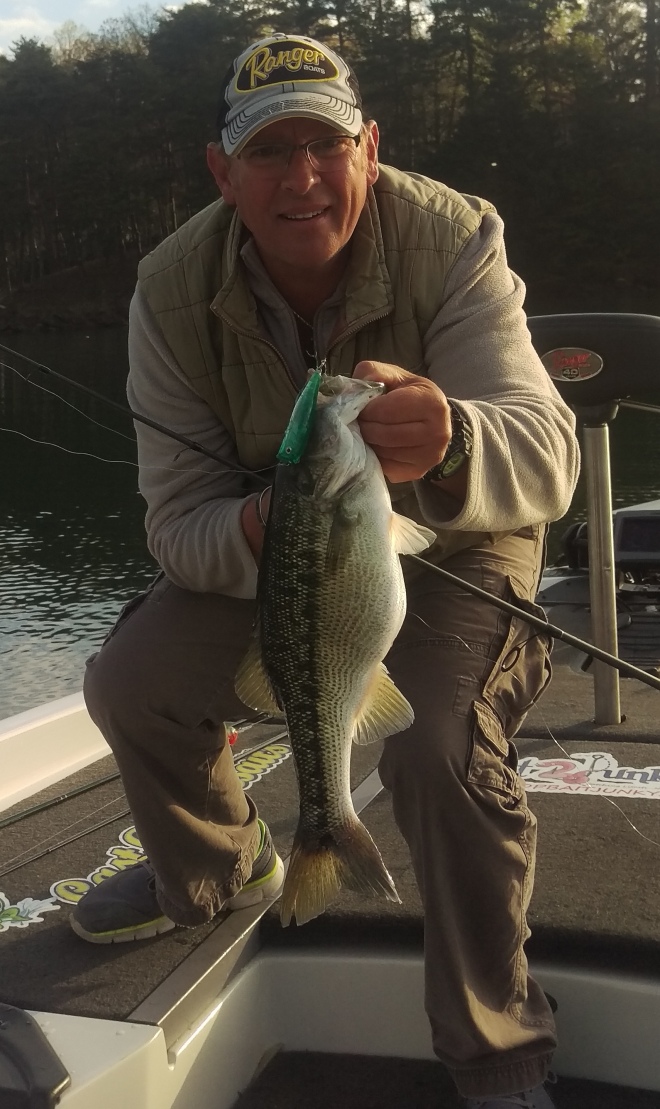 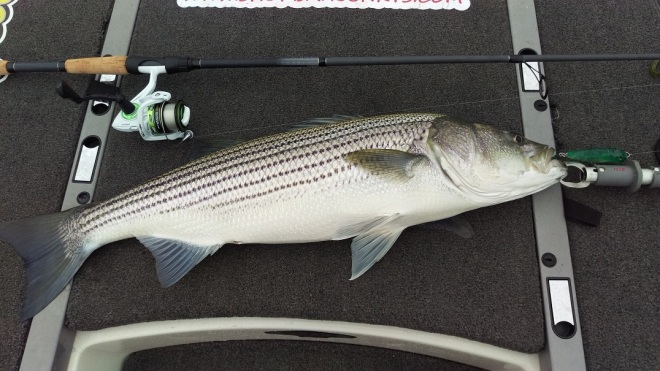 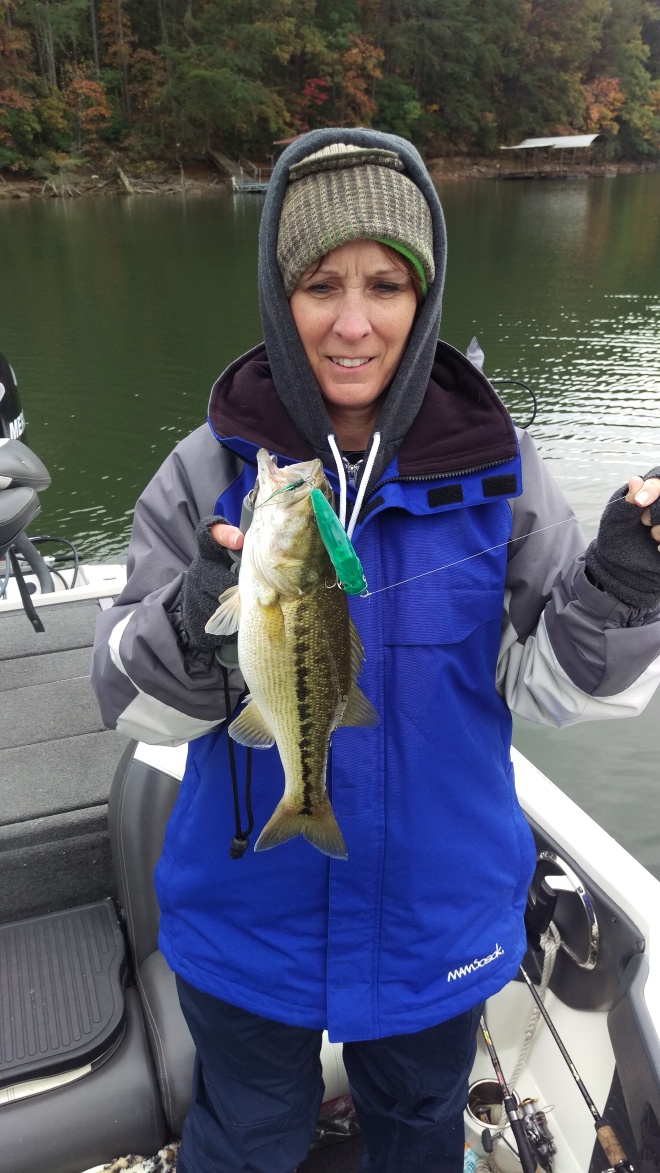 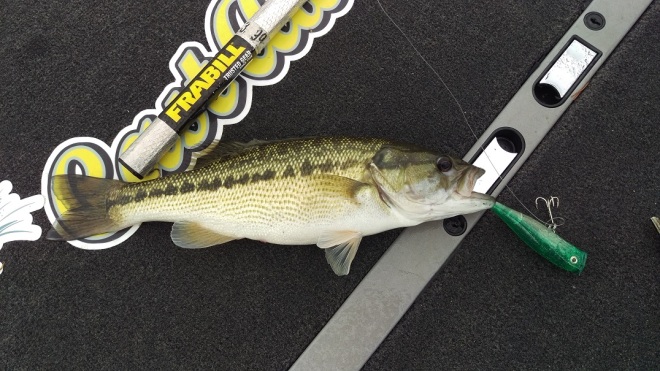 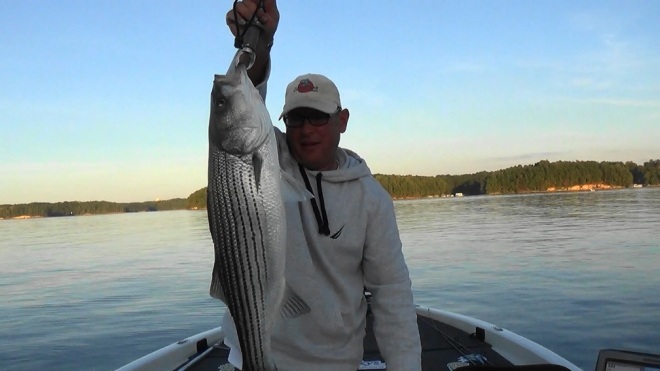 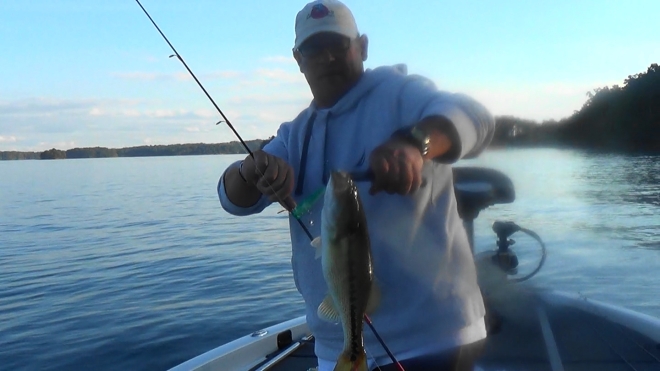 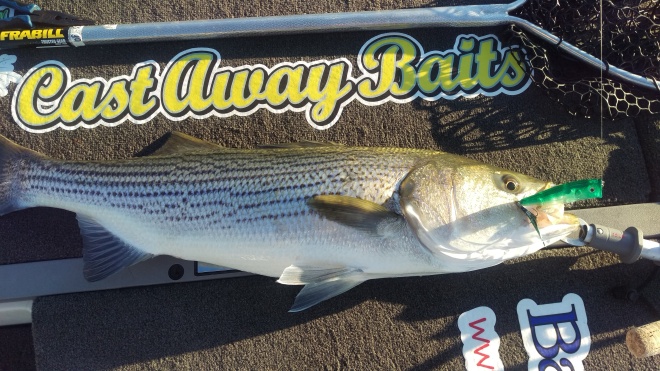 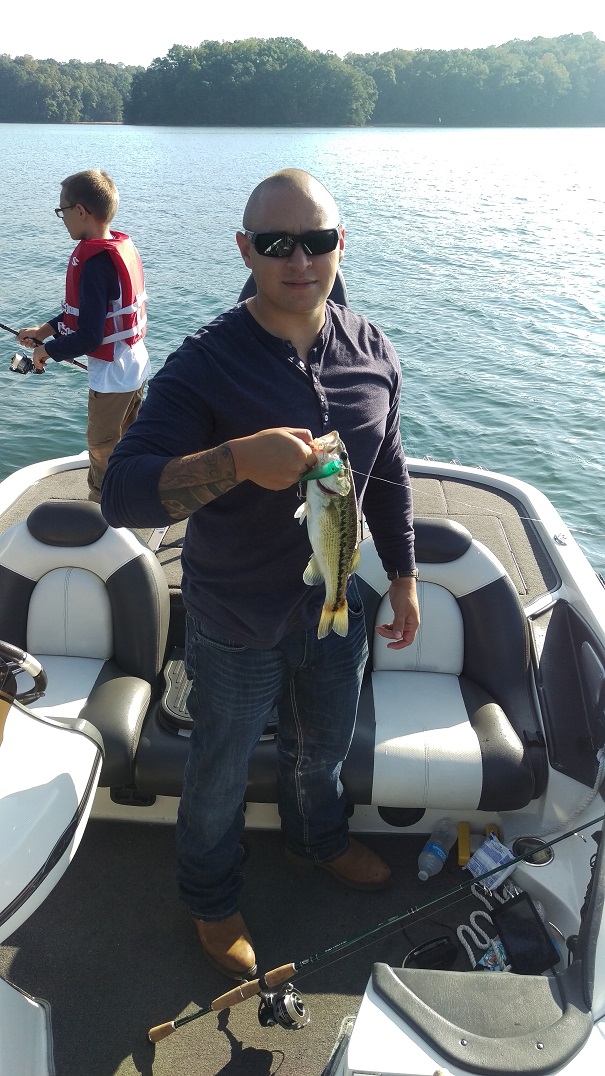 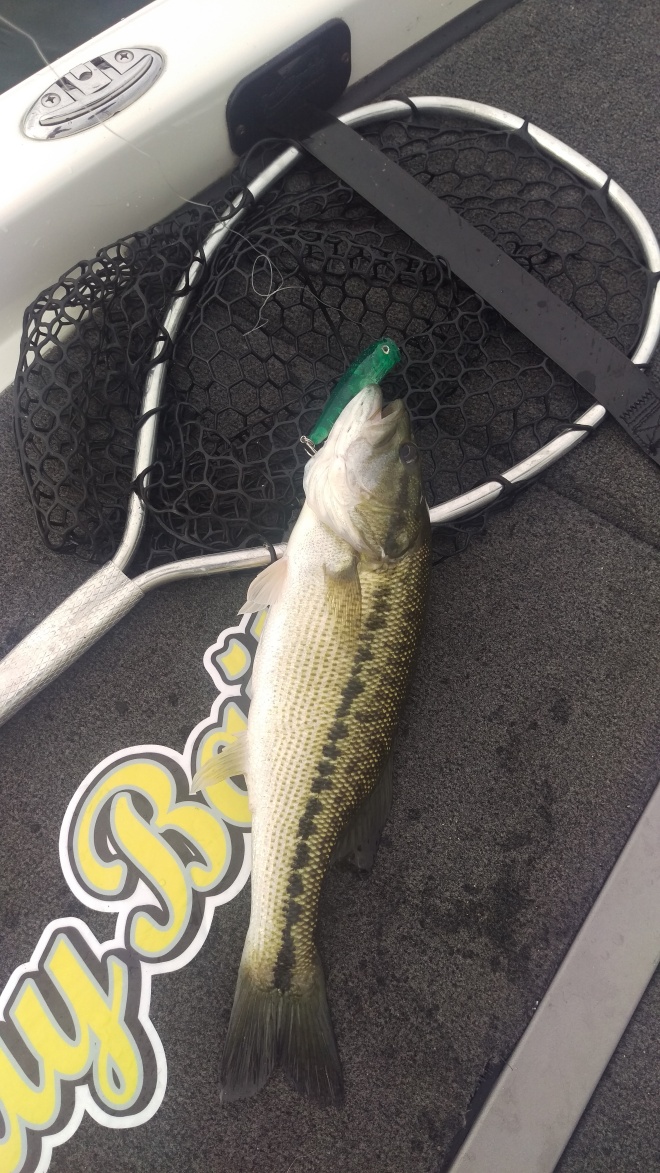 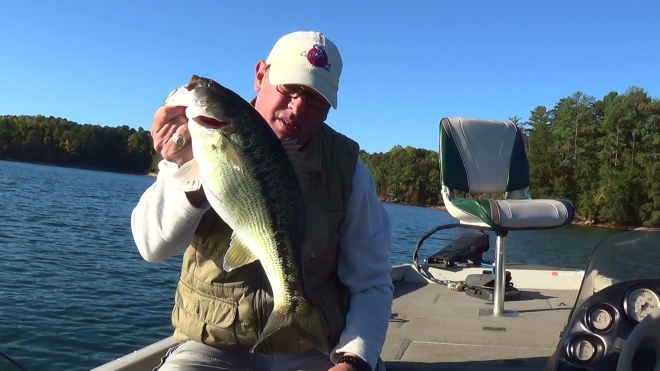 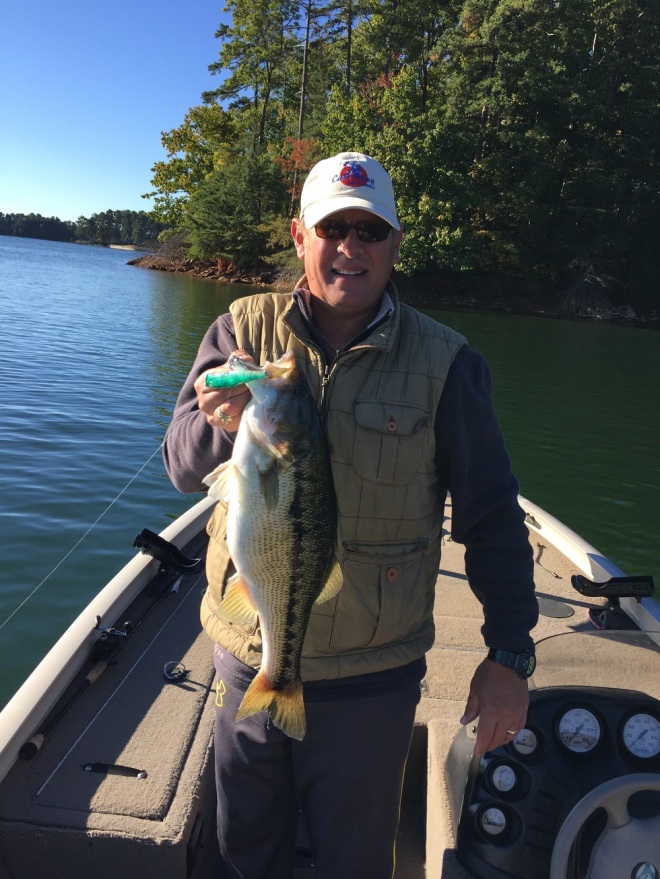 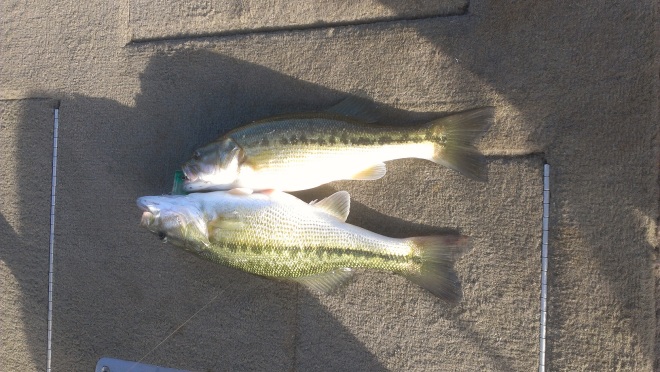 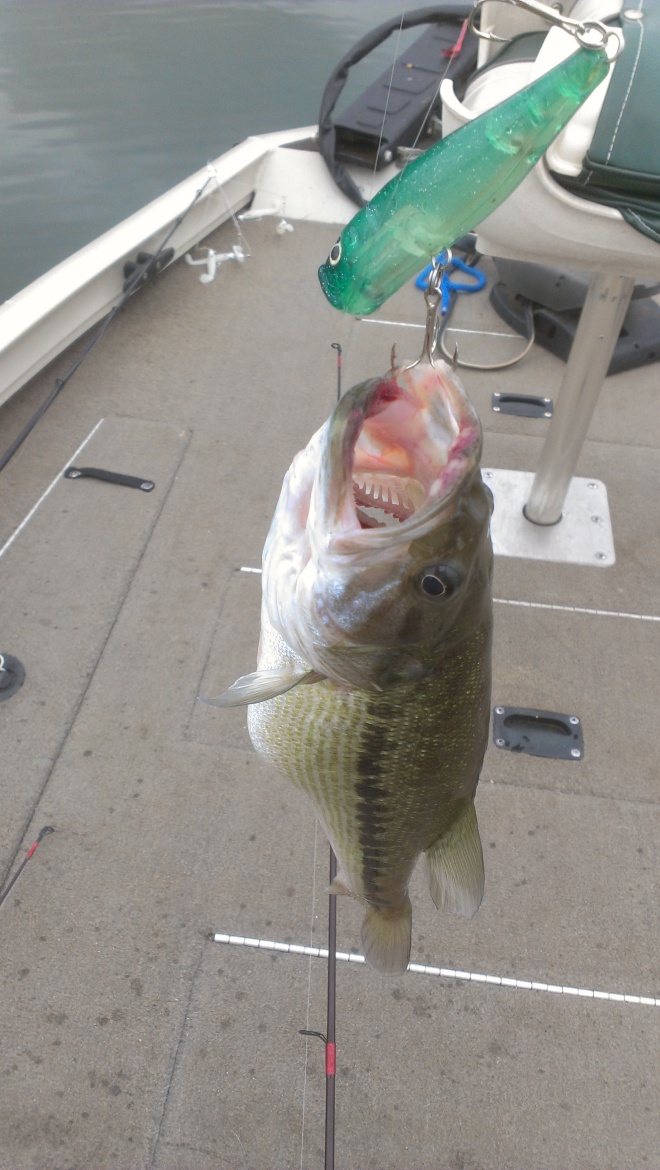 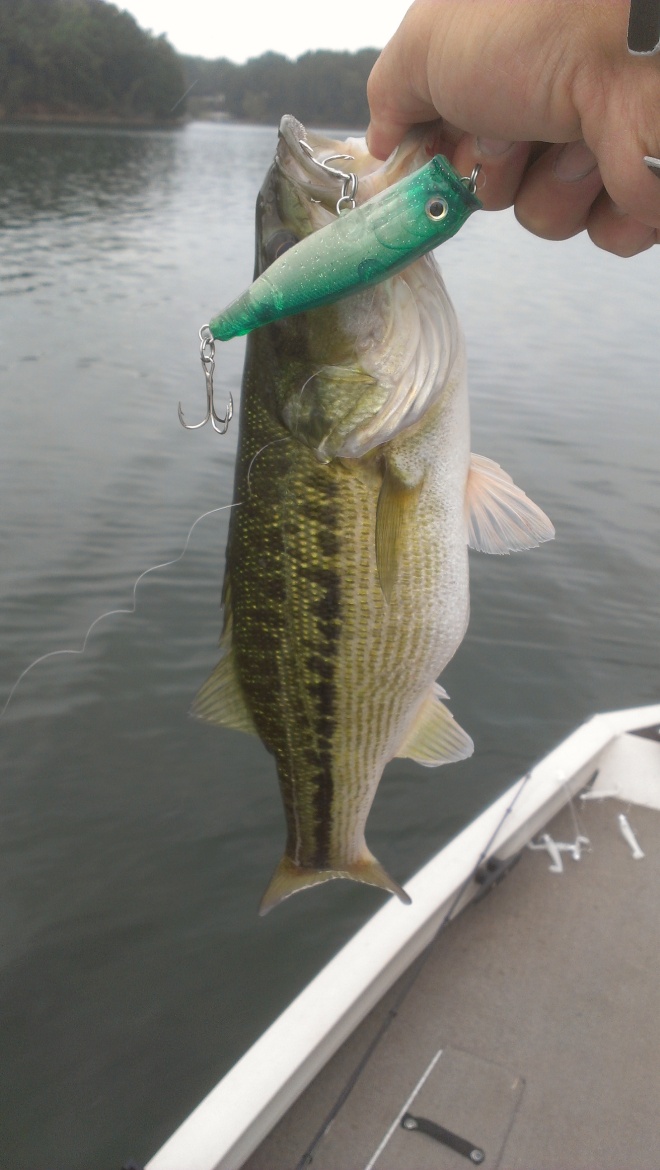 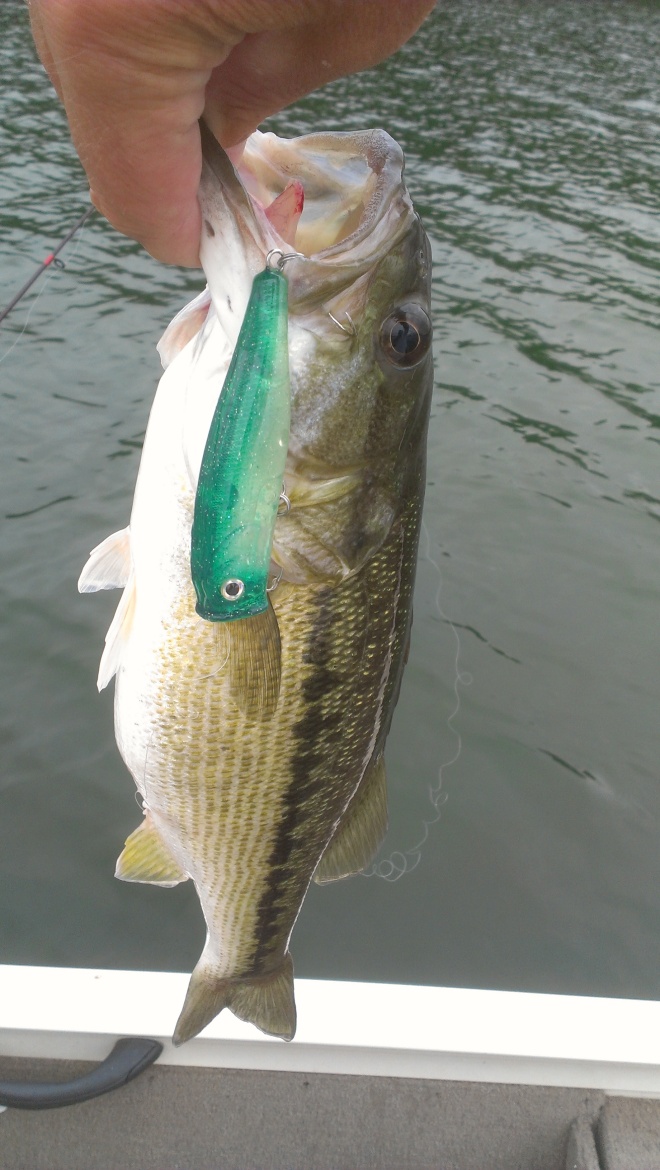 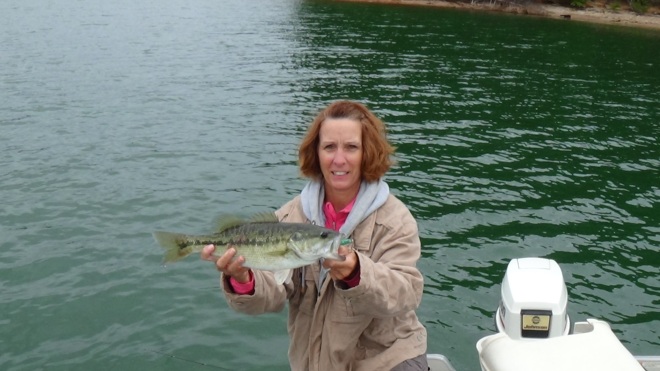 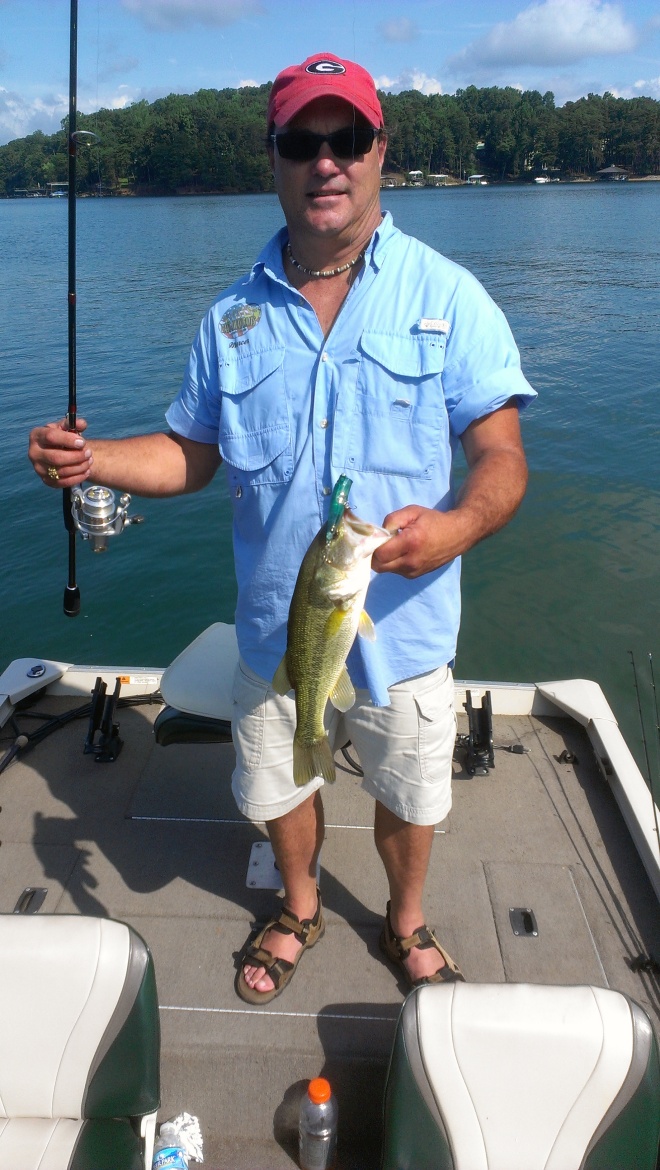 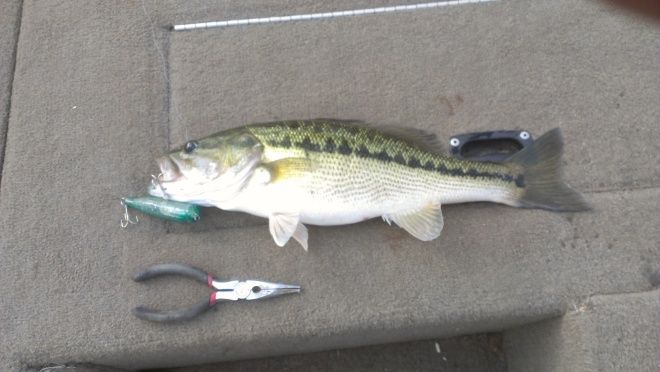 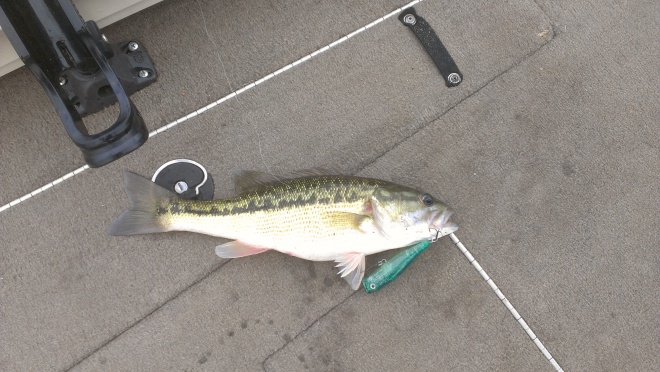 4 thoughts on “The Emerald Popper”