Yesterday my partner and I fished the second tournament on the HD Marine Lanier Trail out of Little Hall Park. The weather and turn out was awesome, and I’m guessing 75-100 boats participated. We didn’t have a chance to pre-fish that much up north before the tournament and we stayed in the Chestatee arm in Lathem and Johnson. Fish were active on the surface where we were at and we were able to get on a pretty good jerkbait bite while the fish were coming up. Most of the fish we saw early were rising out of the brush and shooting up to the surface from 25-35 feet of water. We just put the jerkbaits right over the brush and made some slow subtle jerks with our suspending baits. Here’s a picture of the jerkbait we used: 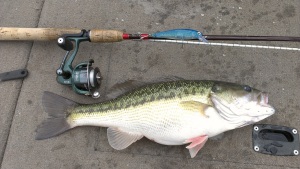 This was a jerkbait that I started using a few months back and it’s been working well ever since. I think we caught better than half of our 10-15 fish off the bait and I was glad to see that my partner brought the one I made for him back in the fall. Once again, the fish that we were working on were all cookie cutter 1-2lb fish. After the sun came up, we went to work on the bank for bigger fish. We started hitting rocks with the cranks. We caught a few more fish on the crankbaits scraping the rocks and muddy bottom in shallow water. My little Sand Key medium diver was the ticket and a few of the fish we caught on the crankbait were suspended fish, just pulling the crankbait slow over a little deeper water in mid channel ditches. With the exception of a few smaller shallow fish, the best pattern for us was definitely working the jerkbait over brush early in the morning, just after dawn. Here’s a picture of the crankbait that worked well for us in the shallows and slow cranking over suspended fish. It was the smaller crank on the right:

All in all, it was a good day even though we probably made another mid pack finish and failed to bust double digits again. I look at it as a success because we have been able to fill a sack for both tournaments. I believe our weight was almost exactly the same as the last tournament right down to the ounce at just under 10lbs. The weather couldn’t have been better and the warm sun was a very welcome site after months of cold weather. The water temps where we were at were a little cooler than the south end and we were mainly in water in the low 50’s. I’d say the bass are very very close to moving up shallow, but for now a good plan is jerkbaits over brush piles early and then trying to find the big boys cruising the shore in the warm afternoon sun.